So my hope is still to extend the visa in Laos or Vietnam at a reasonable price. Then again to the embassy, because I have to have a valid visa for at least 90 days in a third country. Nevertheless, I don’t enjoy Russia and its bureaucracy anymore. Such a beautiful country and they make such problems there. If nothing changes, I have to come up with a new plan for next year. So China and possibly Russia may not come into question. However, there is a short stretch between Kazakhstan and Mongolia through Russia.

There you may get through without a visa, if necessary you only need a permit. However, I have little experience in such regions and I should not meet the winter. So there is still a lot to think about. But: no risk no fun 🙂

A woman sat opposite me and turned balls of glutinous ice and dipped them in something. Somehow everyone here eats this rice.

My first diarrhoea in Asia, juhu!

Here in the monastery one is woken up in the morning around 03:30 o’clock, because at 4 o’clock an hour is prayed. The younger ones sit at the end, I even sit behind them. 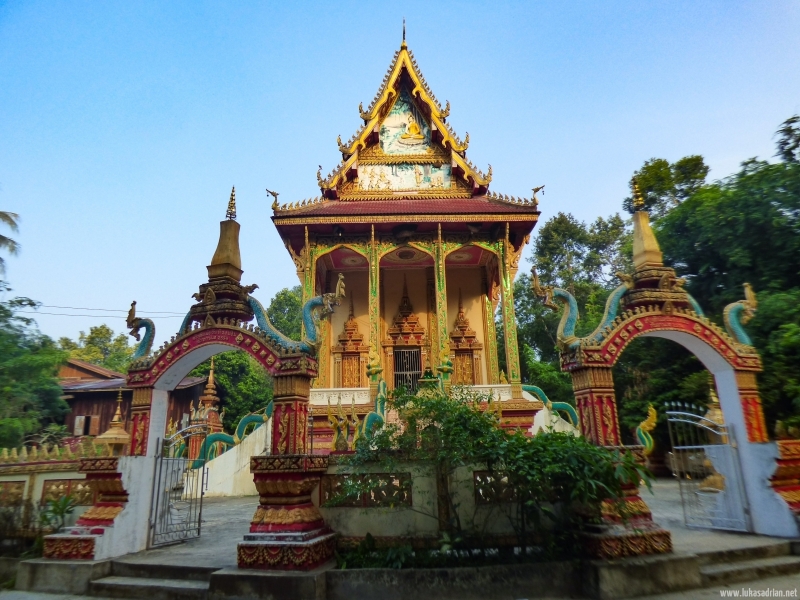 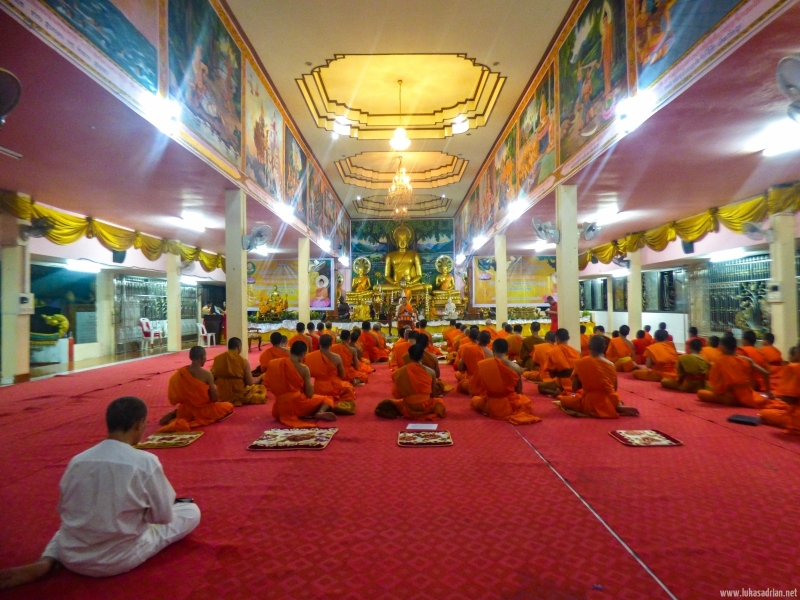 Around 05:30 all (about 50 monks) walk through the village. All with a container or rather buckets. At the roadside there are people waiting every now and then, who after a prayer for them, all monks in turn put a small ball of glue ice and now and then something else in the bucket. People almost sit on the floor. 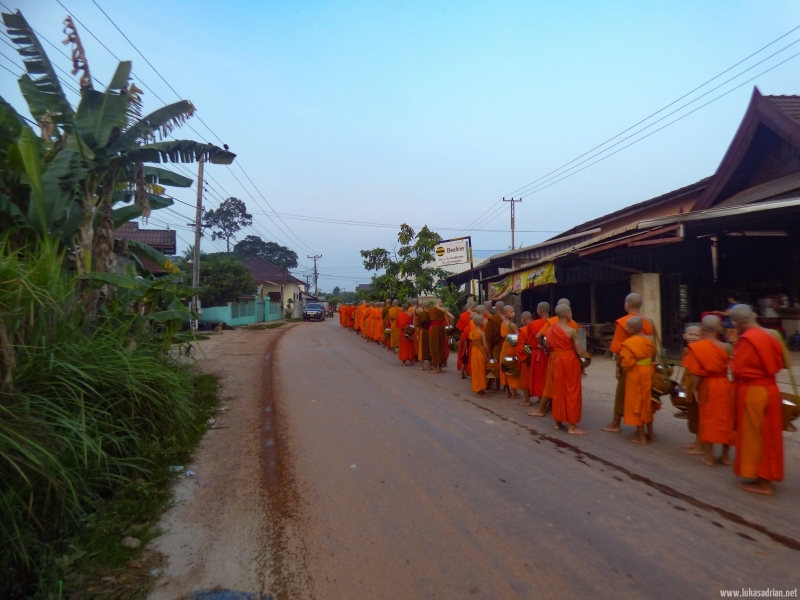 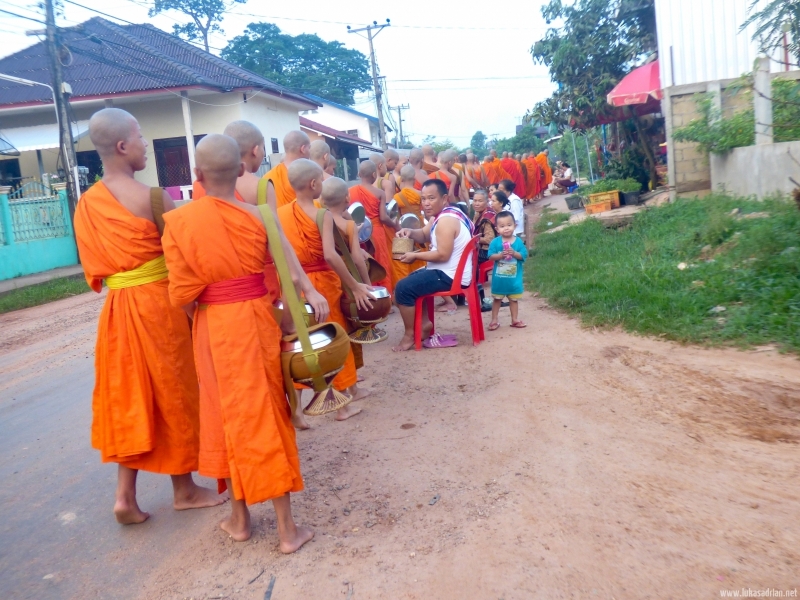 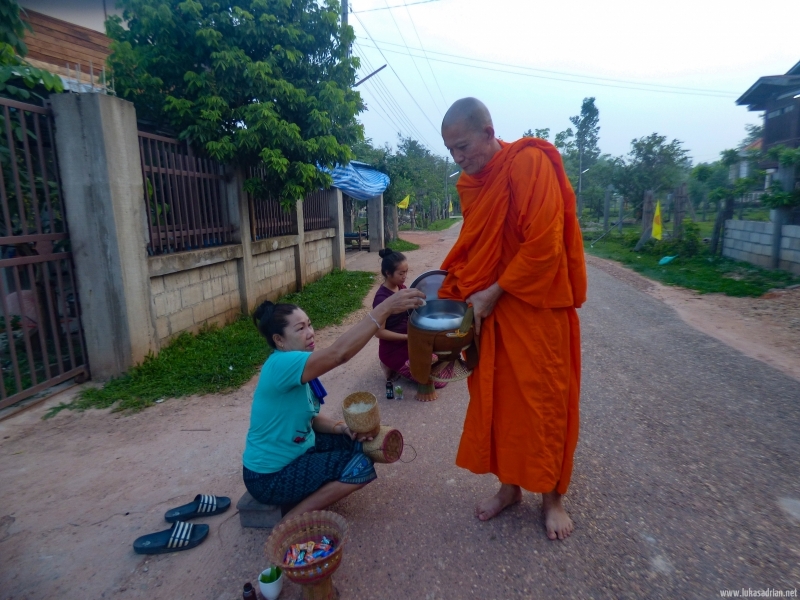 By the way, you have to take off your shoes when leaving the temple. When you come back, you have breakfast together. You eat the rice out of the bucket and get a soup with it.
But what do I see in the soup? Meat! So sometimes I only eat rice and the sweets I got, no soup.
In addition, many people smoke and smartphones are quite common here. Selfies, Facebook etc. are also represented.
After breakfast, the rice from all the buckets is put together. This is then prepared for lunch. 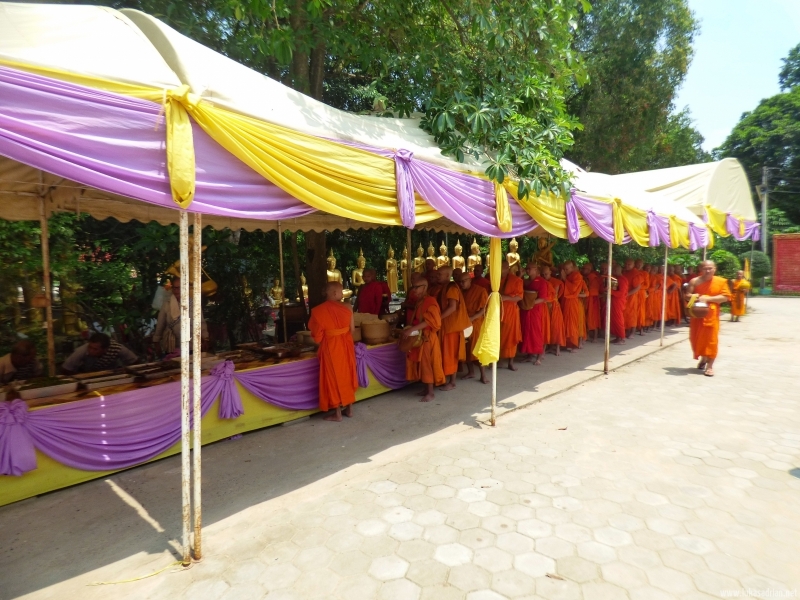 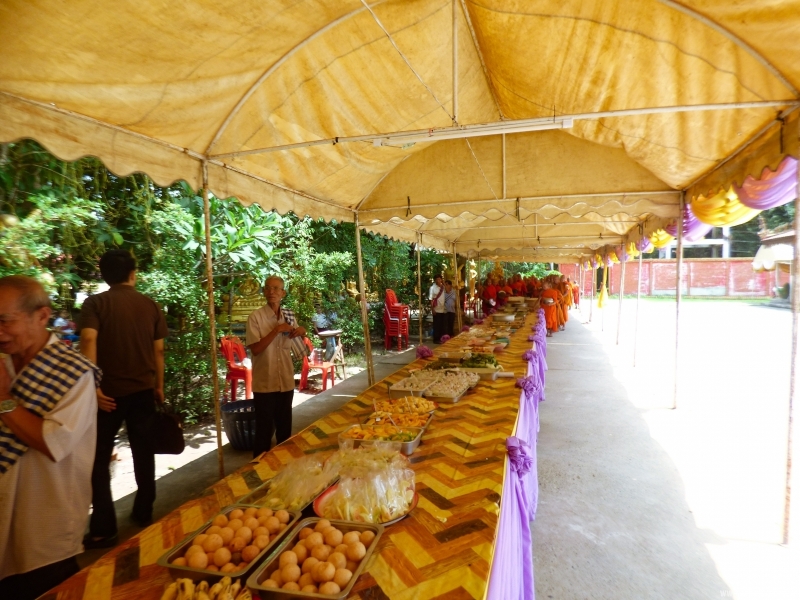 Lunch, which must be eaten before 12 noon and is the last meal until the next breakfast, takes a little getting used to. First the important monks come and take something from the buffet. Eating out of the buckets again. Everyone has his own.
At the end the children and I take something from the buffet. The selection is of course not very large, as almost everything has already been eaten. The inhabitants of the village can take some of it with them at the end.
Besides, meat and fish also still quite a lot as a selection. The monks are allowed to eat meat, but not kill animals. In other countries the monks are vegetarians.
Unfortunately, the one English speaking monk does not have time for my meditation either, because a kind of celebration takes place here. But I got a lot of information from others. See there, my technique was always right. Only the lack of sleep during my working hours at that time was too big, so that I could not practice it properly. 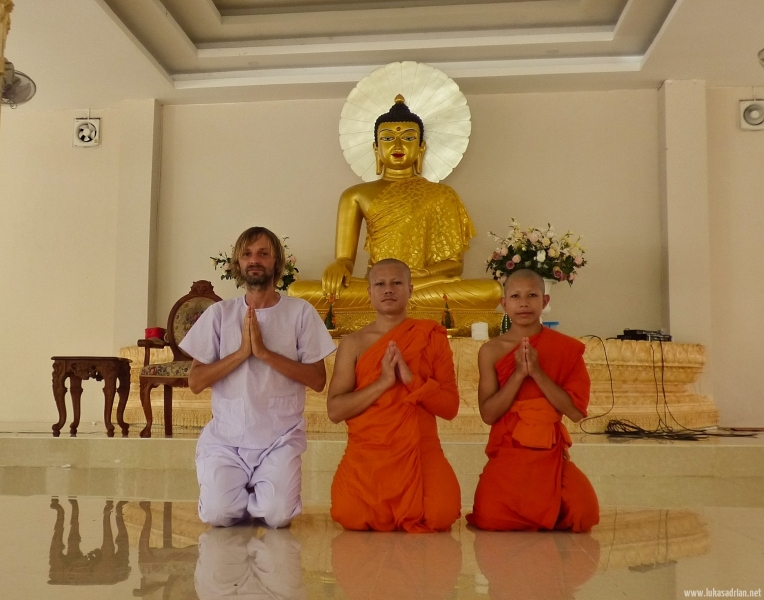 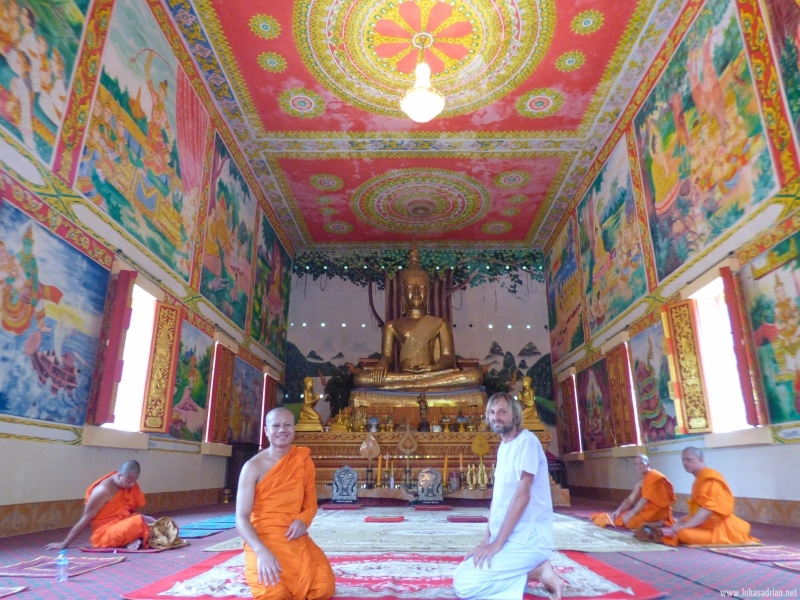 There are many monks from other temples present because of the festival.
Every now and then someone speaks English and can explain something to me. There are so many stories, traditions, I could write a book about them.
I sit at every meeting at the festival and try to listen to some of it, almost for two hours, very monotonous. I couldn’t understand anything.
Still a good opportunity to practice meditation.
The best practices of Vipassana meditation are said to exist in Burma. There it is done very often. In Thailand there is supposed to be, but I think Burma would be more fascinating. 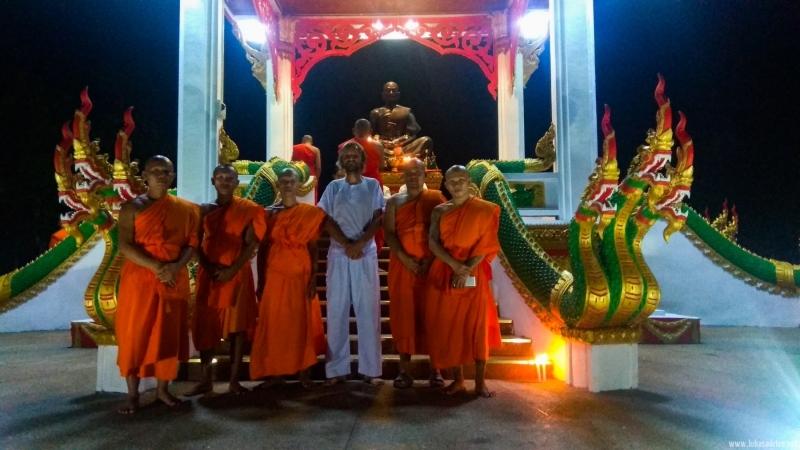 There was a full moon ceremony with many people from the village present. We walked with candles, flowers and presents three times around a memorial statue of the monk Phra Ajahn Sao Kantasilo Mahathera.
The next day the inhabitants came again and brought food, sweets and money. This was then distributed to all the monks. I gave my things away.

So much has happened, so many stories, tales, it would go beyond the scope here. 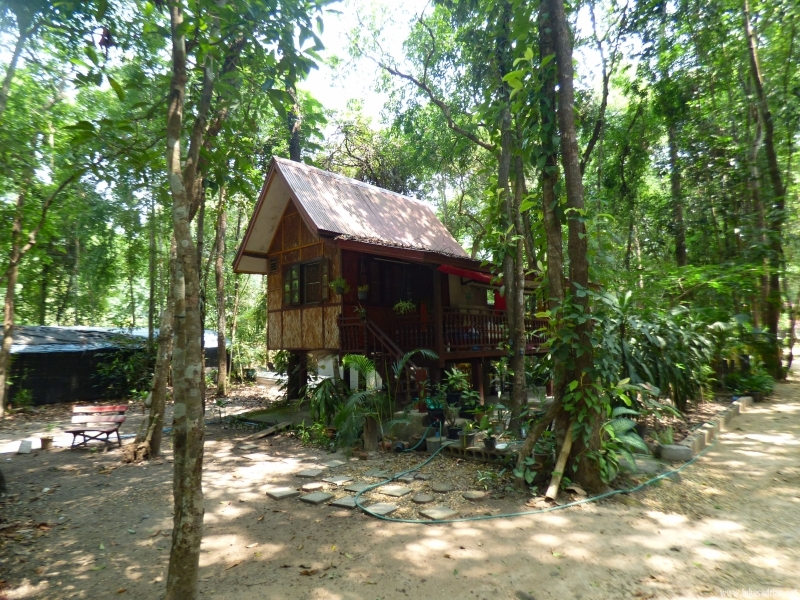 Unfortunately, after six months as a vegetarian, I have small doubts. Without a cooker I only have to rely on the street stalls and restaurants. It is difficult to find anything without meat. For breakfast I only eat rice, sometimes with some chocolate and water here in the temple.
Today for lunch, rice with very little papaya salad, because it was too spicy. But what do I see there? Fish! So now I may also do without it. Everything else was out of stock, because I was the last one allowed to go to the buffet. But there was still plenty of fish and meat.
Maybe I have to make exceptions every now and then until Vietnam, because almost only villages are waiting for me. There the selection is very modest, not even fruits. I have rarely seen fruits in Laos compared to Cambodia anyway. But wait and see, maybe it will work.

Leaving the temple left me with a bitter aftertaste. I wanted or even should leave a donation (definition donation must probably be reconsidered). But I probably gave it to the wrong monk. One of them was really angry. I thought it didn’t matter who I gave it to, it just came to the community. I was probably wrong, the money might be put partly or completely into my own pocket.
They are just normal people for whom money is important for their private things. Smartphones cost money. Everyone keeps the money for himself, it is probably their job. Of course not every monk is like that, just like in life. If an idiot like me comes, I am a found food for some.
I really live in a wrong world and my optimism towards people is getting on my nerves. In India I am certainly completely undressed without noticing it. I dare almost nothing more. Always negotiate, stay hard, no matter if someone is offended or not. It’s always about the money. That is nothing for me.
Here I often miss the Islamic countries. One is regarded as a guest and not as a petrol pump.
Nevertheless, the time was beautiful and brought me new ways of thinking. Now I have to put everything in order.

In Vientiane I booked the bus back for the same day, bought a guitar and spent the day eating, thinking, playing guitar and preparing on the smartphone. In the evening I went to the bus to Pakse.

In the morning, when the sleeping bus stops briefly, women with meat skewers storm into the bus. 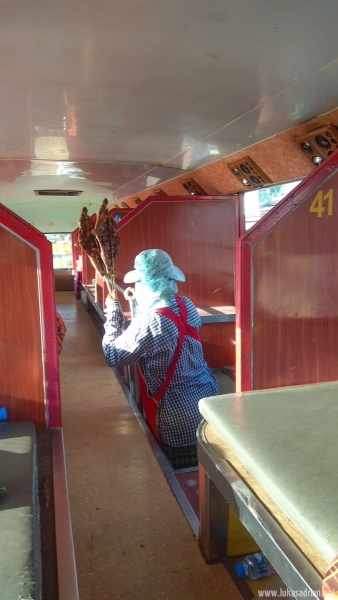 If you want, you can buy a meat breakfast at 6 in the morning.

Laos and Thailand have similar languages, so that many Laos inhabitants also speak Thai.

School bus, a little full, but still plenty of space 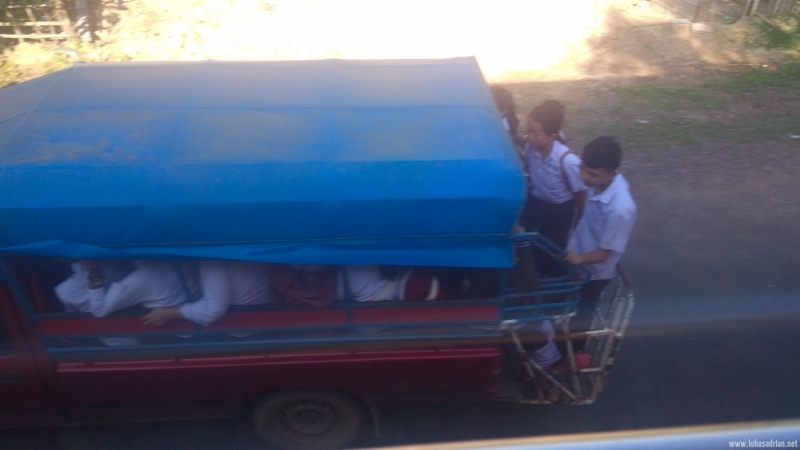 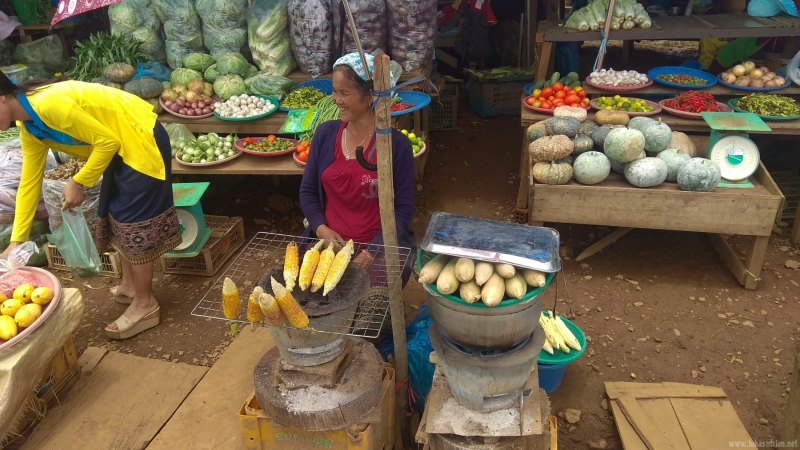 If I saw this more often, I’d be too happy. 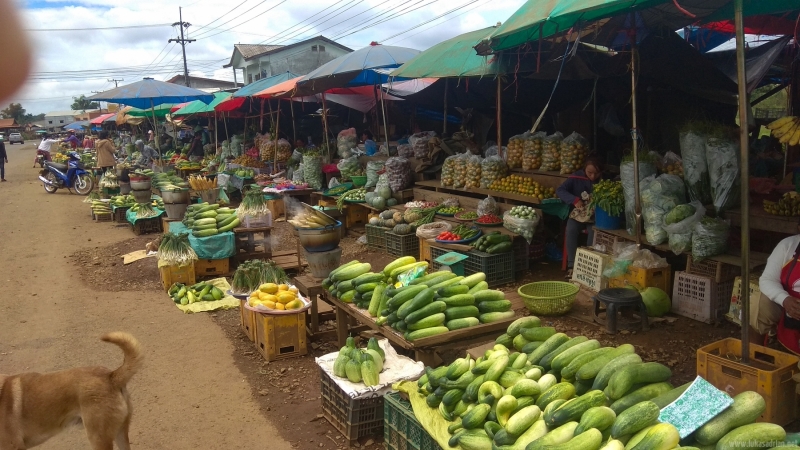 I stayed in Pakse for three days. During this time I hitchhiked with the Hoa from Vietnam to a native village. 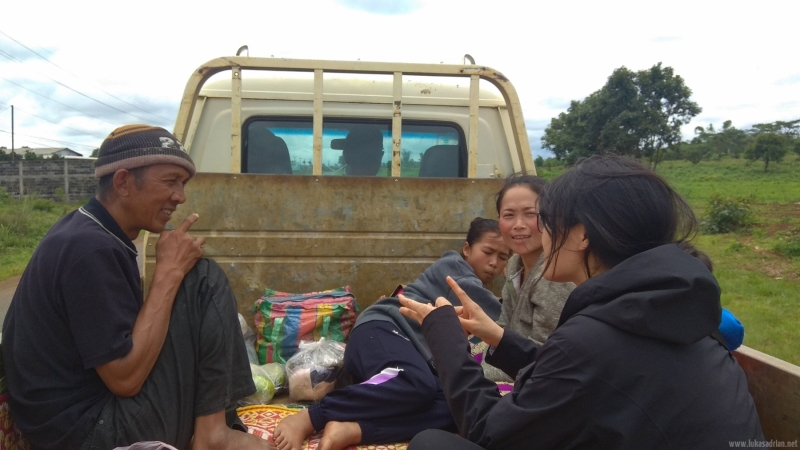 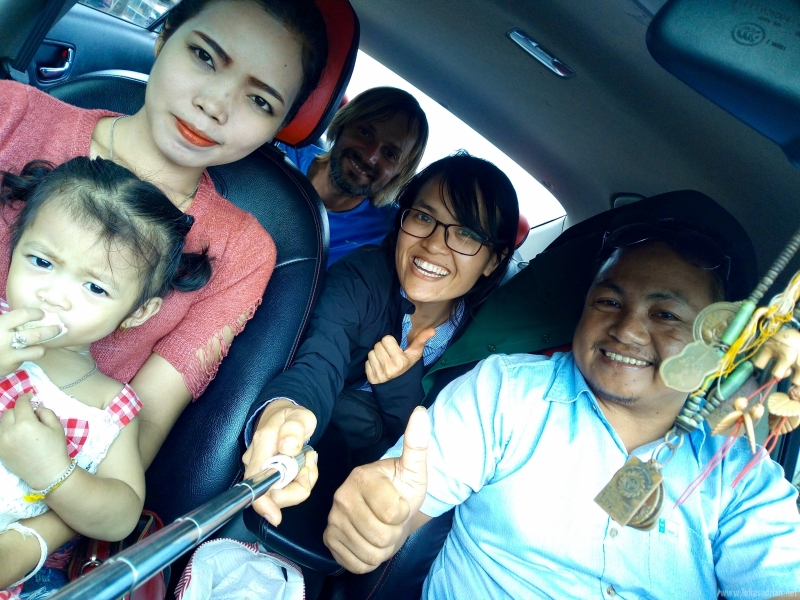 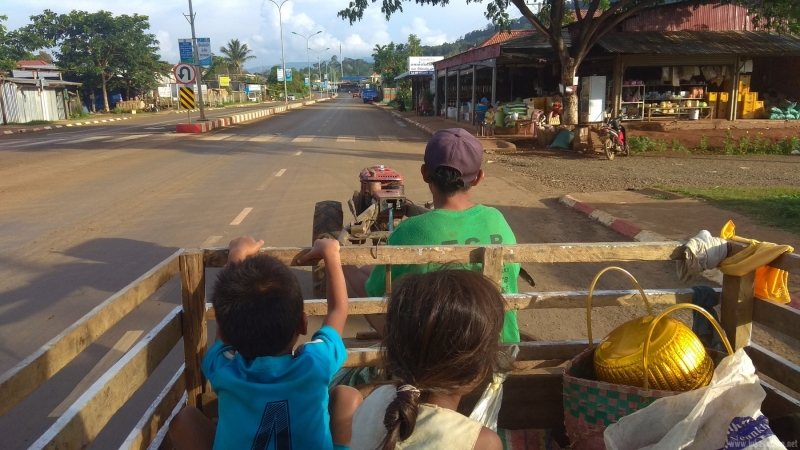 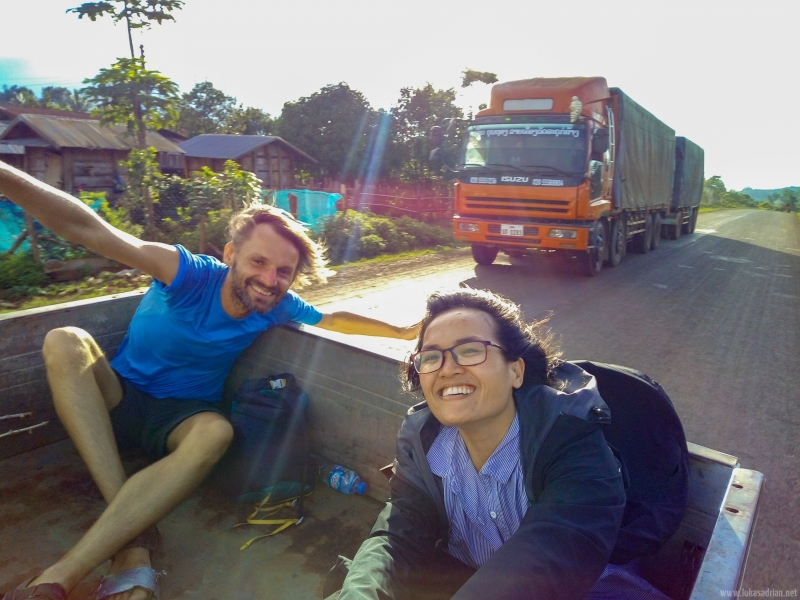 People live there according to old tradition. There are rituals, animal sacrifices and much more.
I found their medicine particularly interesting. Juices from trees, roots, chewed leaves, somehow medicine against everything can be found there. But some people prefer to go to the pharmacy, because the healing is faster and cheaper. Cheap in the sense that the medicine man is quite expensive. Doctors cost rice, chicken, buffalo, depending on the medicine man level.

Tobacco is very common there and is smoked too much. 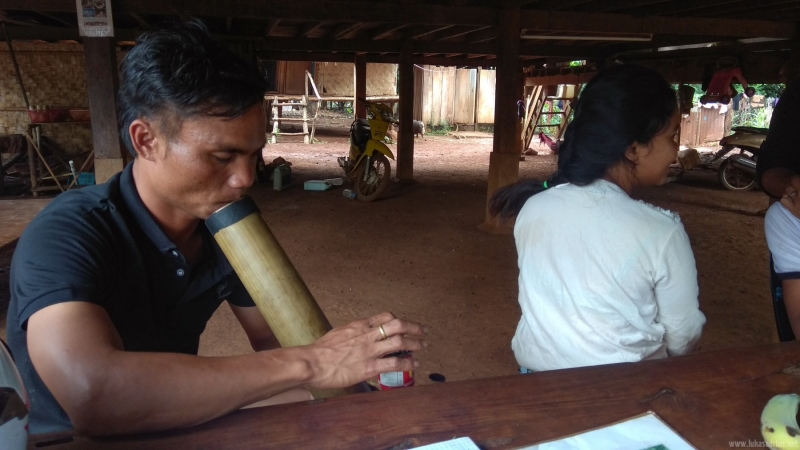 There’s really a lot of rules there, like, among other things.
For example, if someone dies in an accident, the whole family has to live in the forest for five years. Or even entering a strange house has rules.
Men often have several women, whole families also live in one house, so that sometimes far more than 20 people live there. Children are born in the forest, people still go hunting in the forest, etc.
Men have it much better than women. The woman works hard in the fields, the man sells only what she has worked for. Otherwise he does nothing.

He also told a lot about the story and the different kinds of coffee.

What else you can use coffee for, how to prepare it properly, how healthy it is (men should drink less than women, up to middle age max 3 cups, women 5. Do not mix milk and coffee, but still it is better in the morning with milk instead of just black, etc). There was too much information to write a book about.
The village itself and the people should not be photographed at their request. But there are no big differences either. Only that more people walk around with a big bamboo whistle. Even children.
One notices that the modern age is also slowly arriving here. There are satellite dishes, people have only one wife.

By the way, the way to the village was beautiful and I was really looking forward to cycling there later. A lot of greenery, forests, green mountains, on which great forms of clouds stuck. Very nice people.

I had about 10 days visa for about 300 km of mountains and villages and even more nature. Then I should reach the border Lang Lay to Vietnam.

All photos from Lao: Album