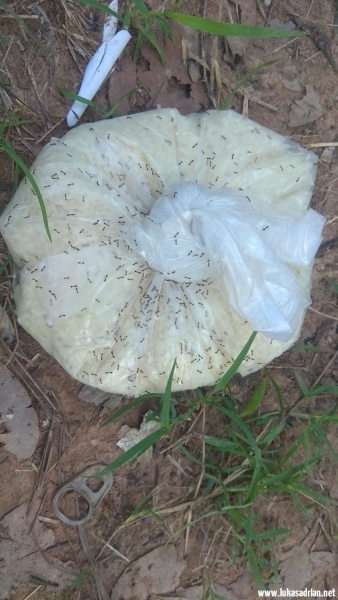 Internet we got directly, I Metfone, Natali with Smart. It cost me 6 dollars, no idea what volume.
Typical are these houses on stilts, where almost always hammocks hang down. 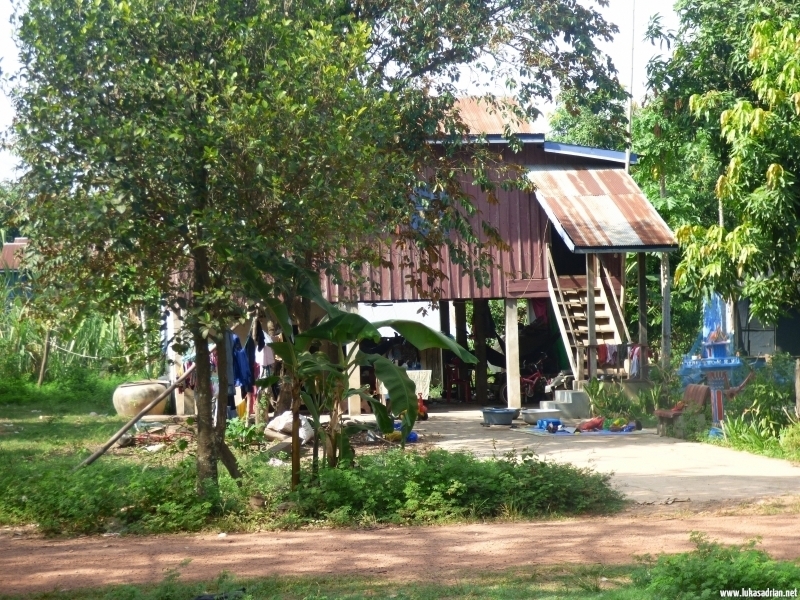 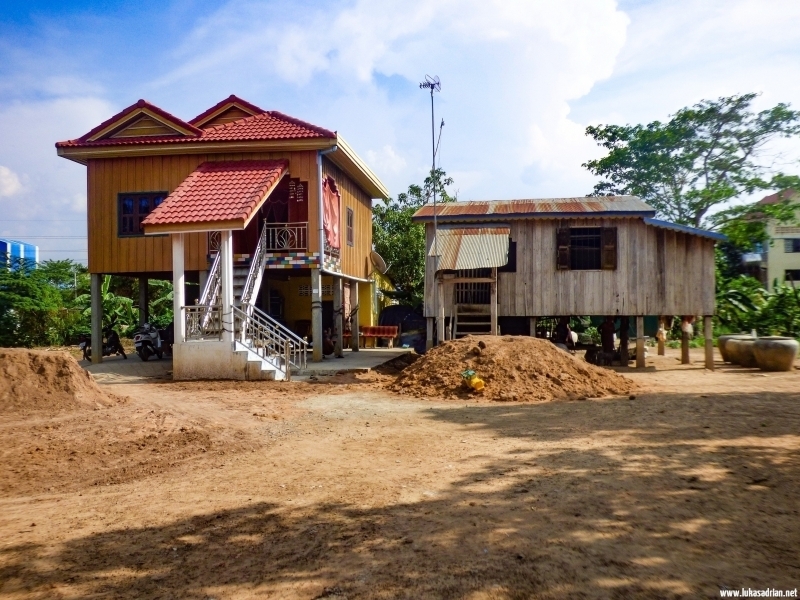 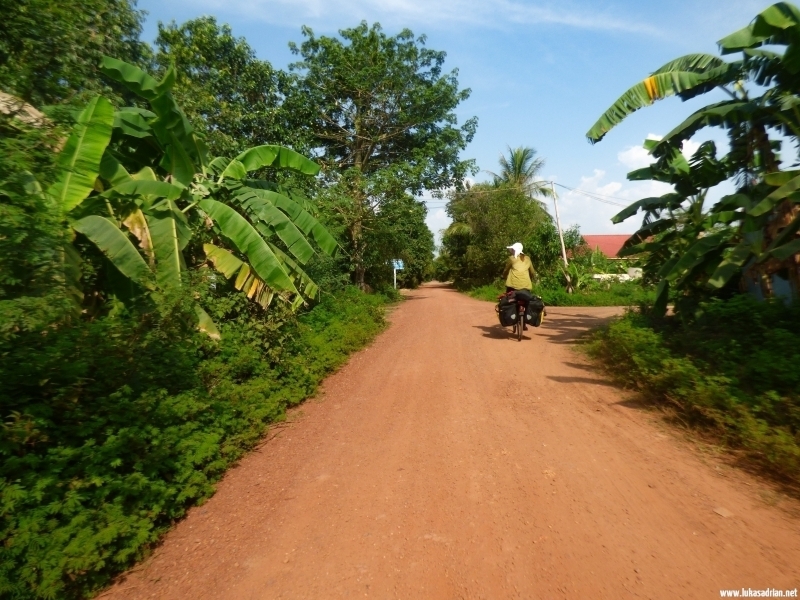 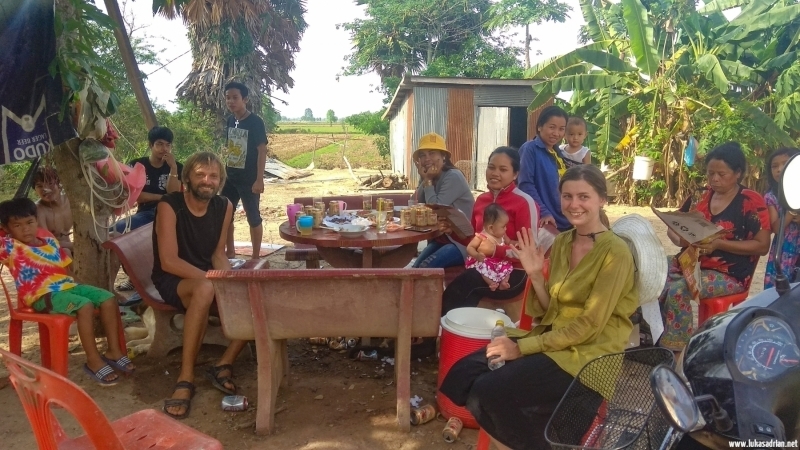 It went towards Siem Reap. On the way we slept in a temple, in an open big room. Around 4 or 5 o’clock the women dressed in white prayed. They had short hair. 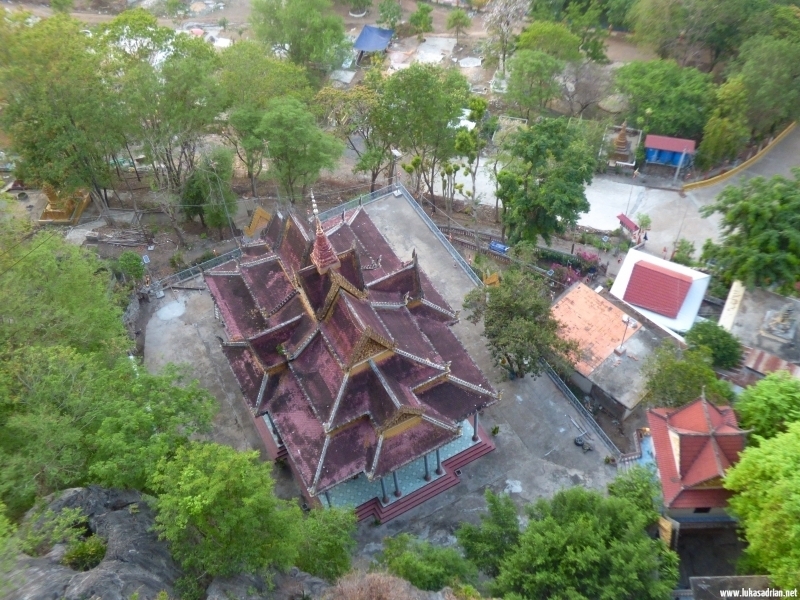 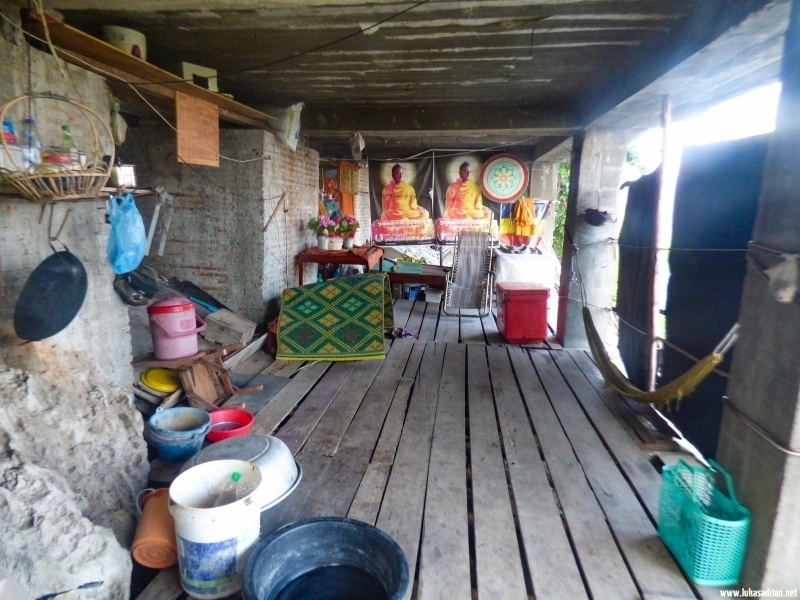 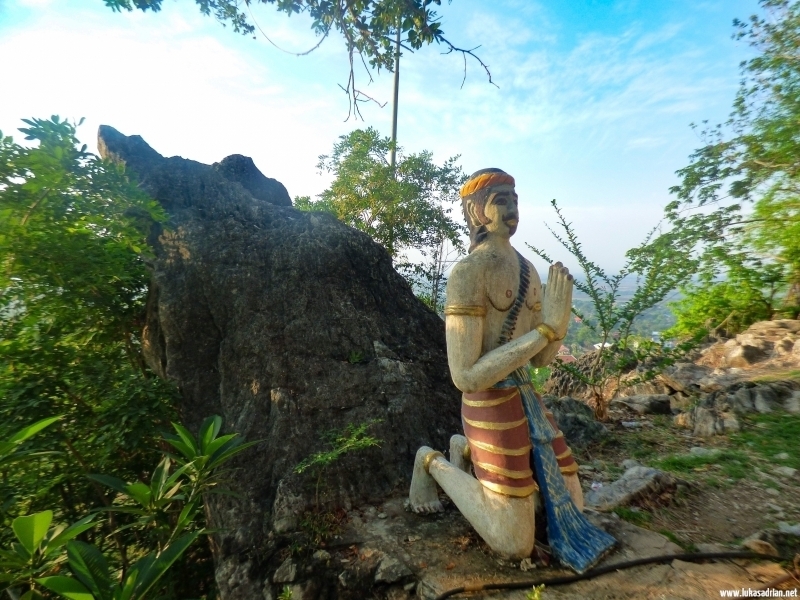 The next day Natali rode with other cyclists, because I wanted to have breakfast, not them. I wanted to catch up with them. I rode like a madman in the heat. Unfortunately I didn’t know how far they were in front of me.
In the late afternoon I found out that the others were far behind me, because I finally got the coordinates from her. I felt like an idiot. The topic should concern me still something in the head. 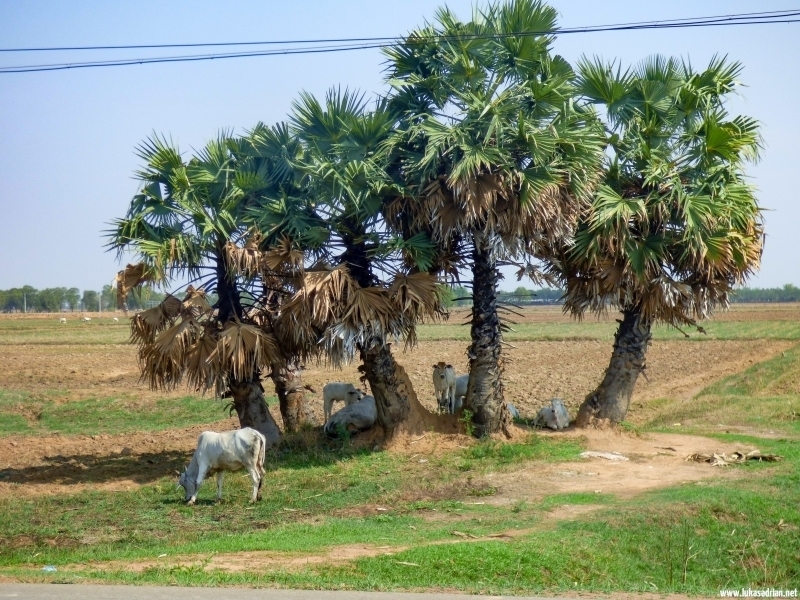 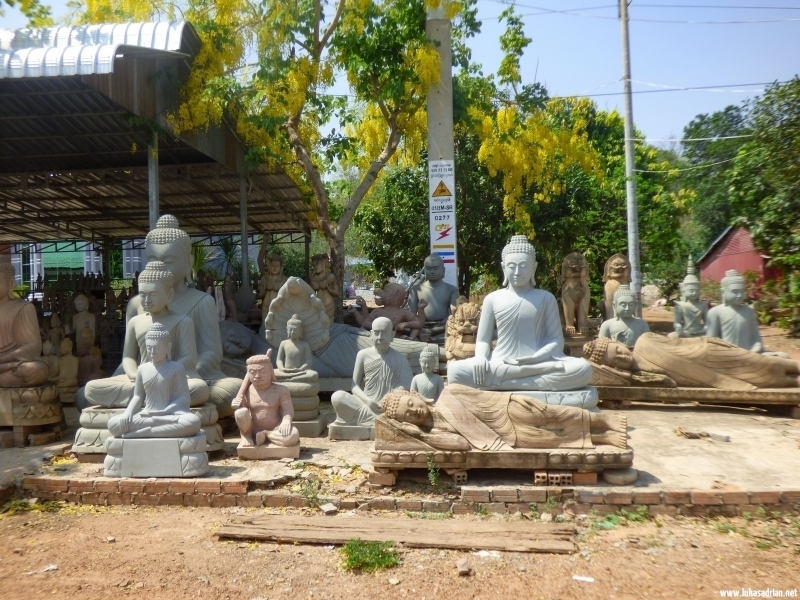 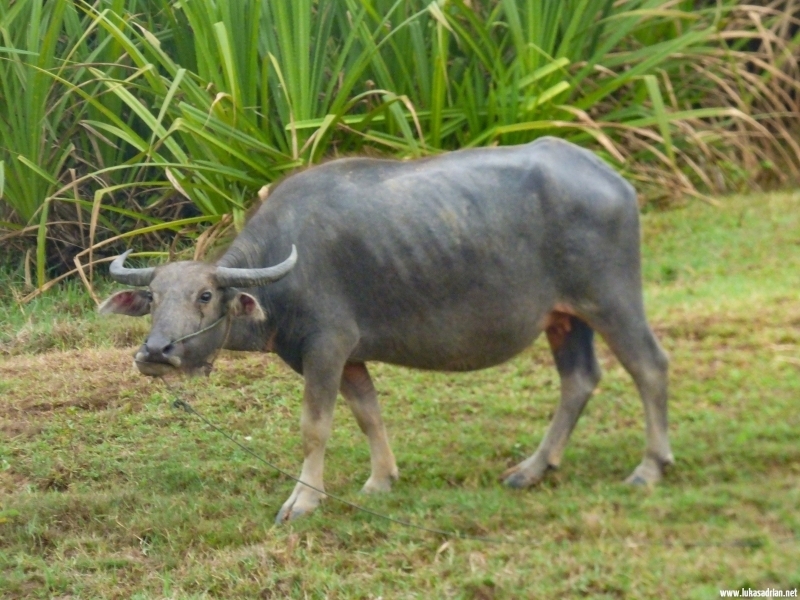 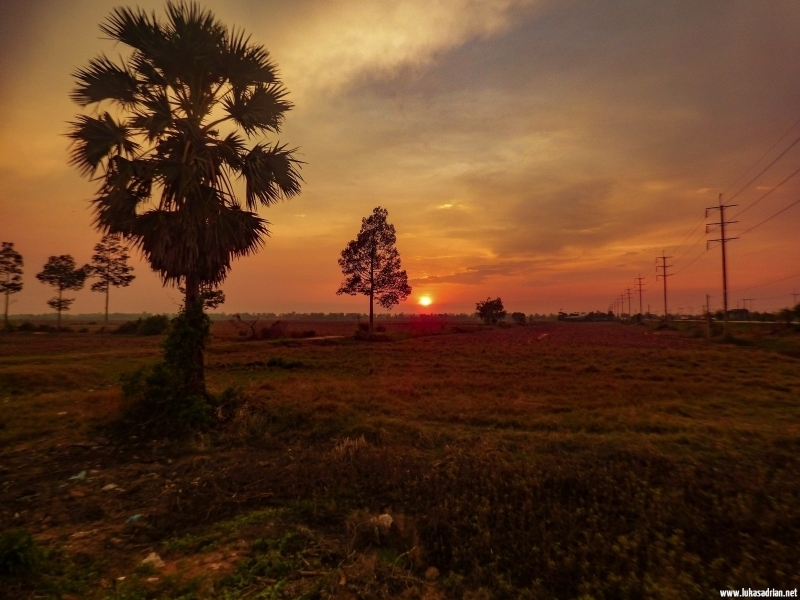 Shortly before sunset we met and slept in an open room at a police station. The beer-smelling police allowed us to, but only after a call to the Immigration Office. There we pitched our tent and fell asleep to loud techno music. You often hear that here, coming from restaurants or shops.
Again and again temples. I find it interesting that important persons are provided with a halo similarly as in Christianity. Are there parallels? 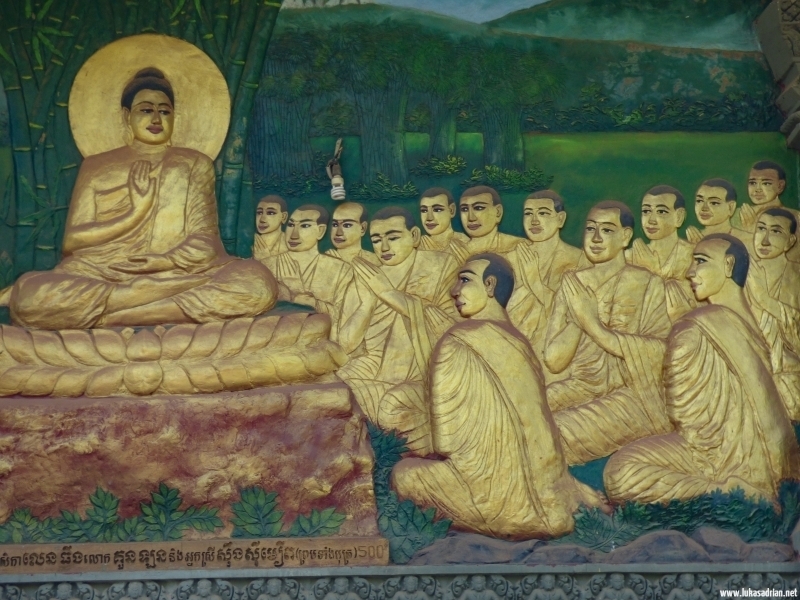 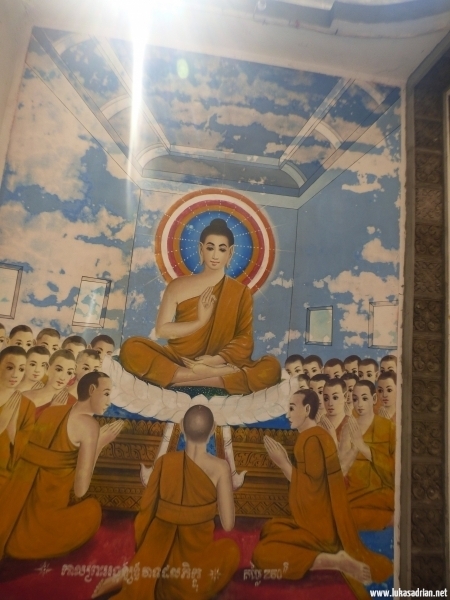 In Siem Reap we were at Rumi Camping for 11 days. It is a tourist town, but we were a bit outside and had great days with the owner Emre and the guests. So well we felt. Natali could even sell some Henna. 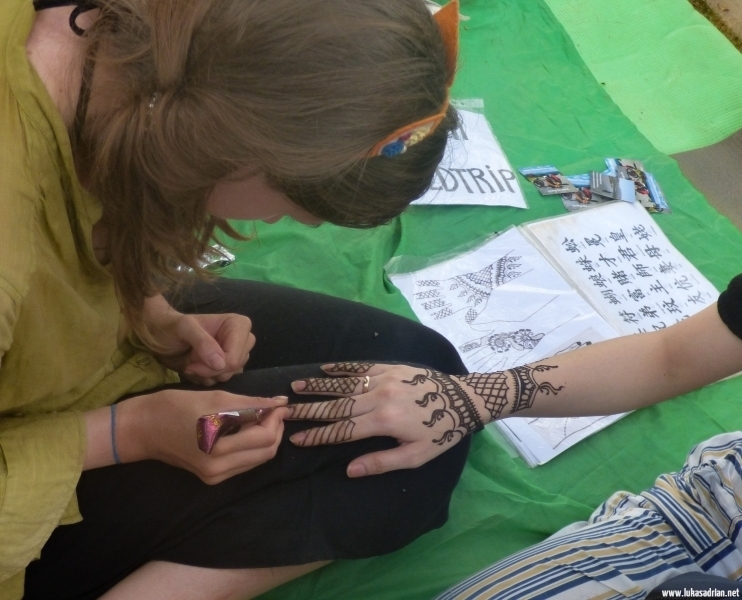 We went to New Year’s, which goes three days. Everywhere you are sprayed with water and smeared with powder. So pack mobile phones etc. well. This is a huge party. When I wanted to get Cane Sugar Water for a short time, I came back wet and white. People also walk around with buckets, laughing and dancing.
Here’s a video of me walking through the center

Natali conjured pirogi and other meals. All very tasty and vegan. Even from the funny rice flour she succeeded 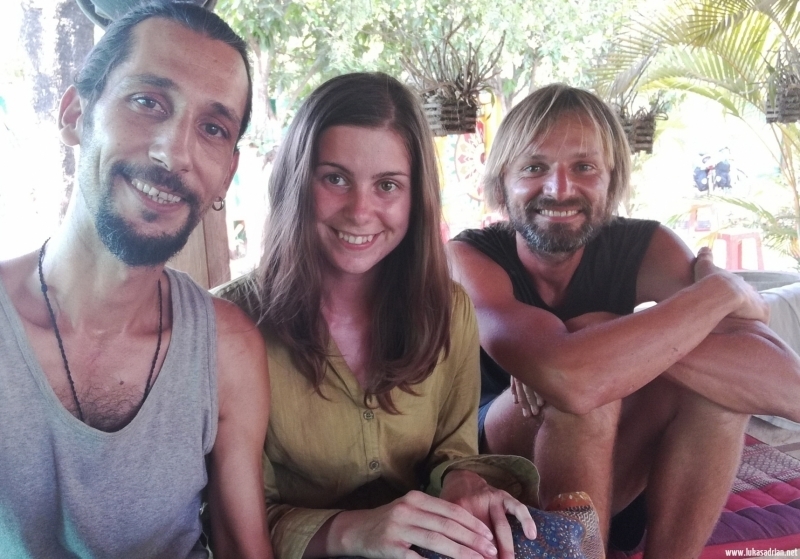 The very famous Angkor Wat is a large complex with many temples, which is very important for the people of Cambodia.
Entrance is of course very expensive, it is 37 dollars. For this you need a scooter or a tuk tuk, because the temples are far away from each other.
Now it would be boring to buy two tickets, rent a scooter for 8 dollars and play tourist games.
From 17:30 the entrance is free. But also the first temples close. But one temple is still one hour open. With the bicycle it was therefore possible.
One gets into the park via small paths, thus passing the checkpoints. Osm cards marked these checkpoints so that one gets out behind them.
At many temples the tickets are checked again. So watch out, best look for a back entrance and watch out for the workers dressed in pink.

We were lucky as two guests had tickets and a scooter. So we could “officially” enter for another three hours. An employee recognized us on the photo of the ticket when he checked us out. We would have been there this morning, he said. Of course we said yes. 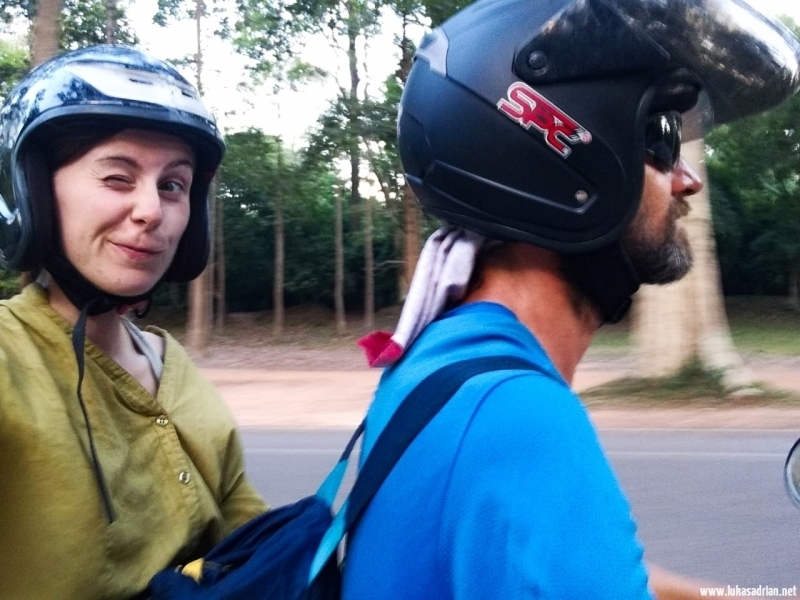 These are the two 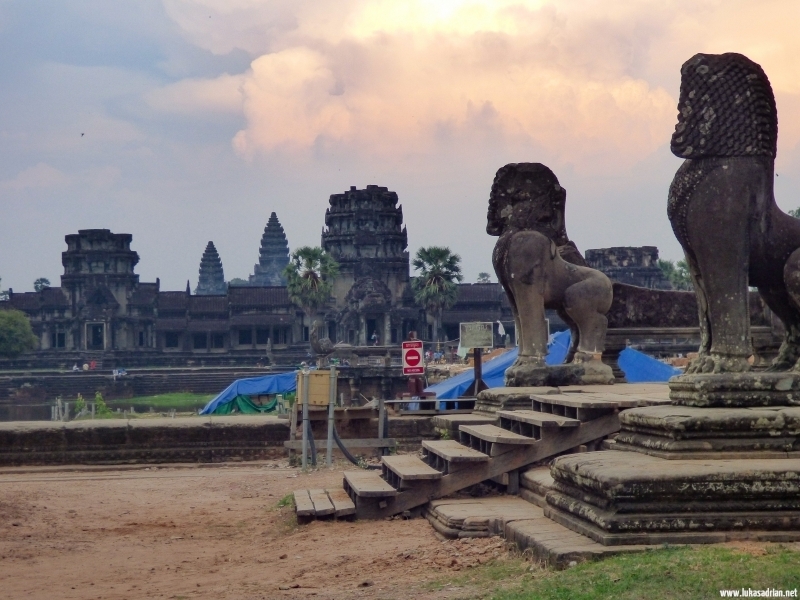 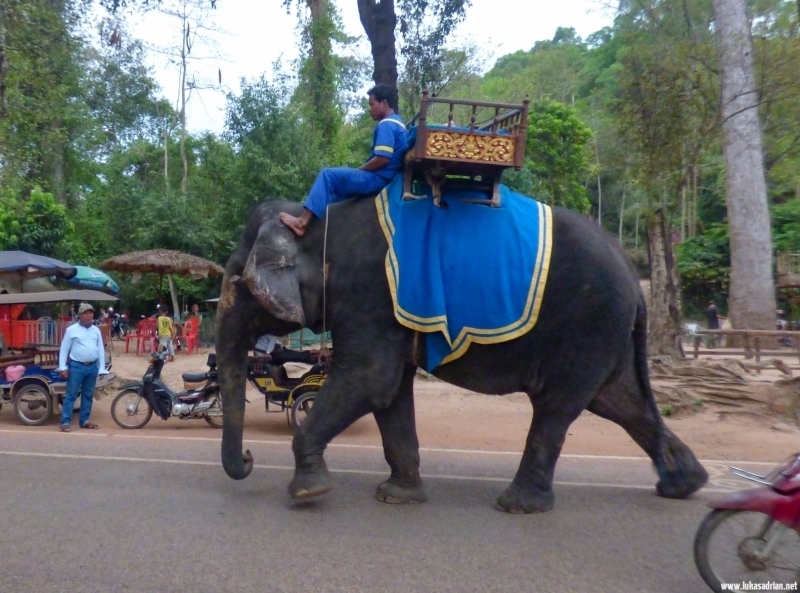 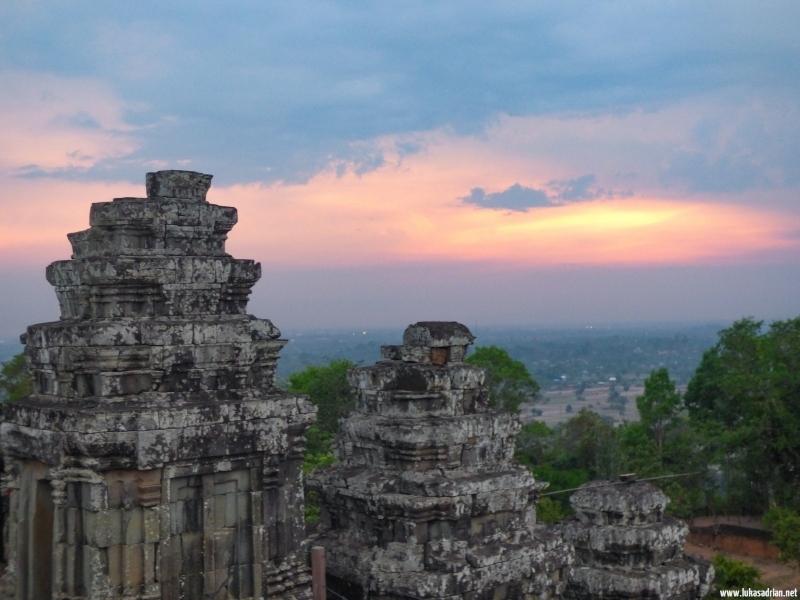 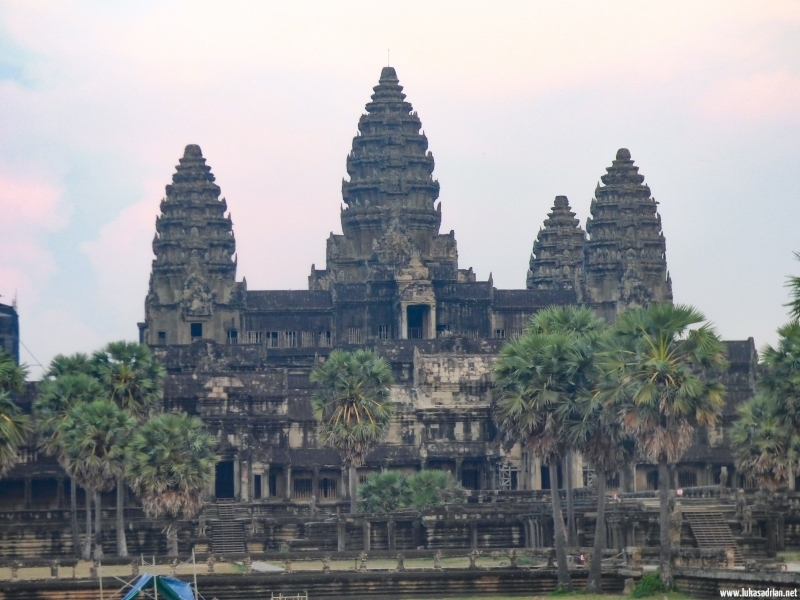 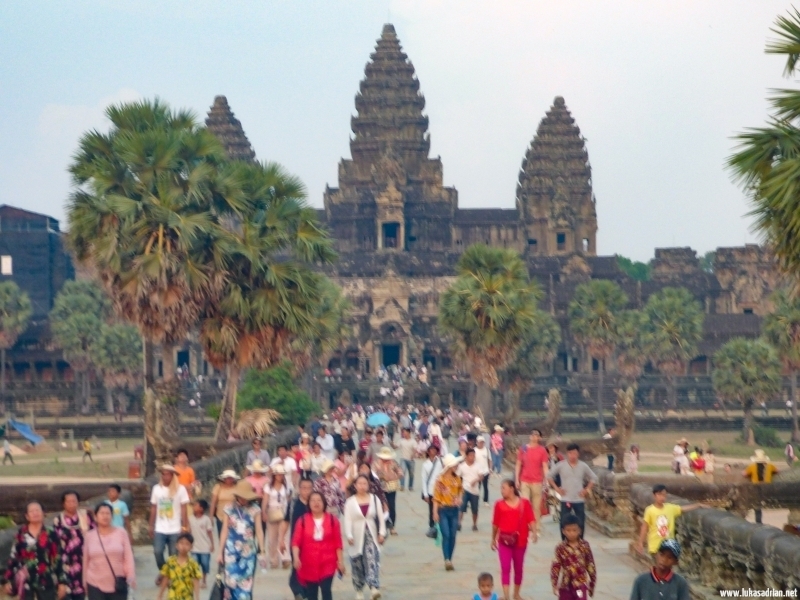 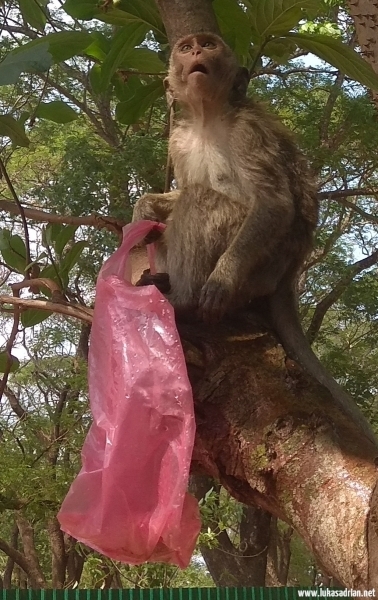 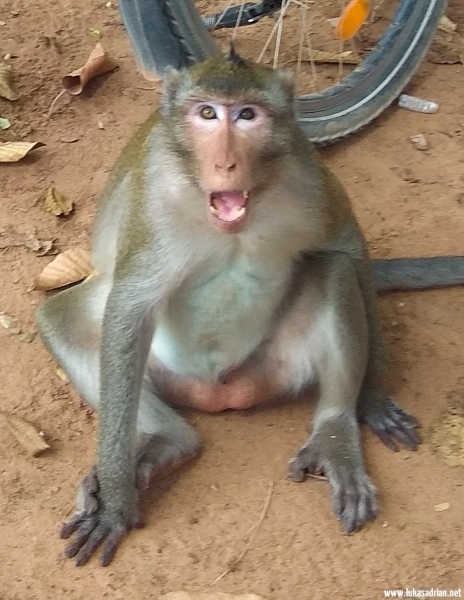 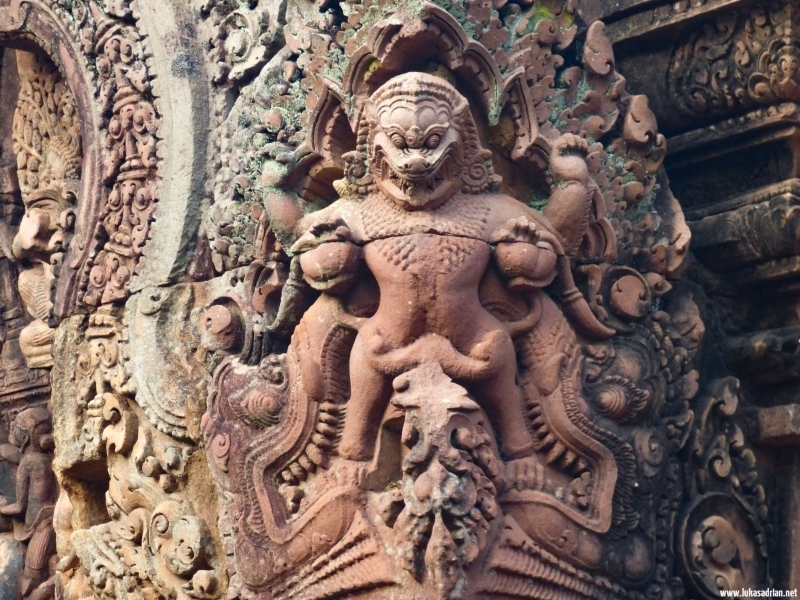 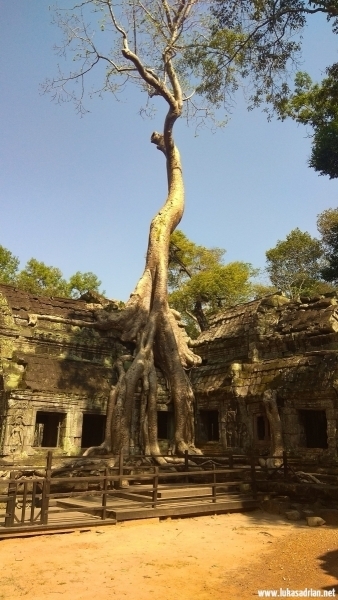 We reached a temple by hitchhiking, because it was about 30 km away. It was very easy to find people who took us with them. The entrance was free, because we smuggled past the checkpoint again.

Here a video of the journey there.

Be that as it may, we have not seen all the temples, but only the few beautiful ones. 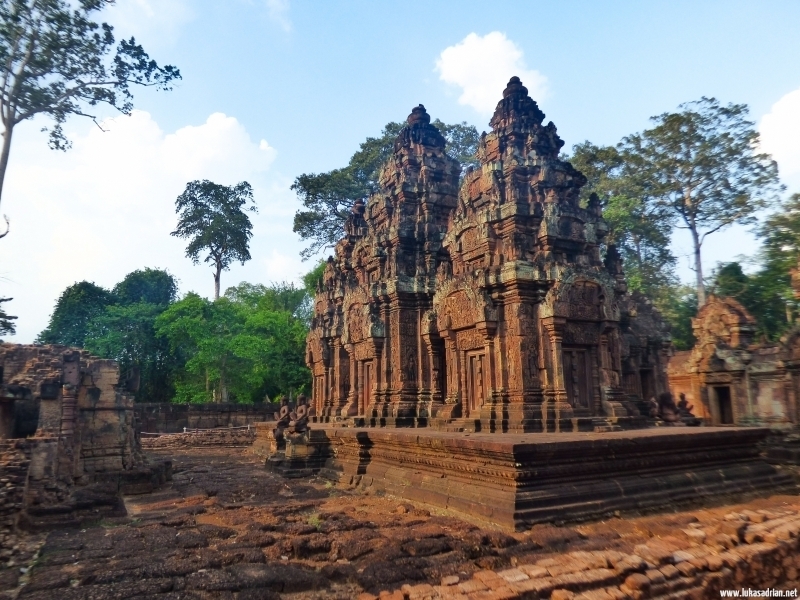 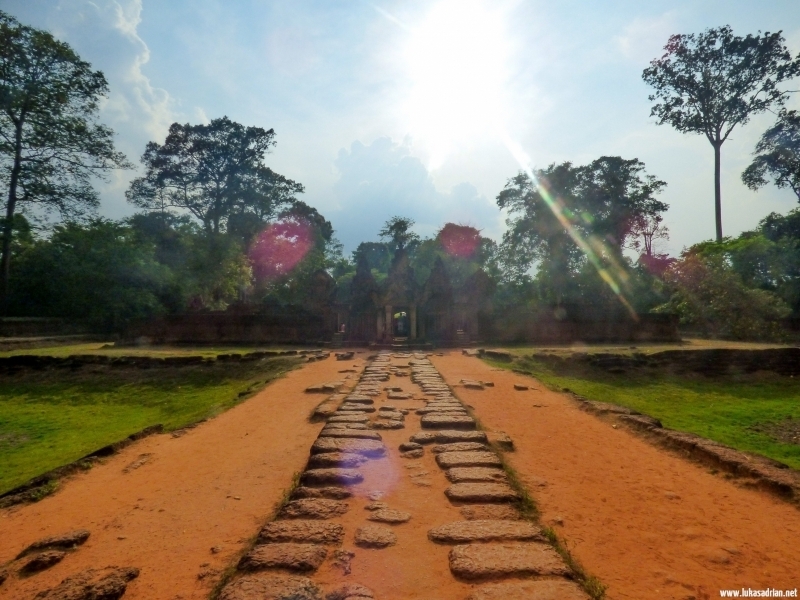 More photos on the Internet

Cambodia likes to party. You hear loud music somewhere every day. People like to drink the German Premium Beer Ganz Berg. Often you get this offered here by the people. I think you can just party with them directly.
Karaoke is very popular here. Of course at full volume. But that’s just outside of tourism. The people here are incredibly nice and always have a smile left for you. Of course, as a tourist you have something special for them, namely money. Thus the price rises already times. So one should know the prices and if necessary also say no, if it is too expensive.

As already mentioned, hammocks, smiling people, beautiful places and tourist prices. After about 2 weeks it should go now to the sea, where we experienced dream beaches…
All photos from the trip can be found here: https://lukasadrian.net/index.php/nggallery/alles/15-Cambodia?page_id=2436&lang=en